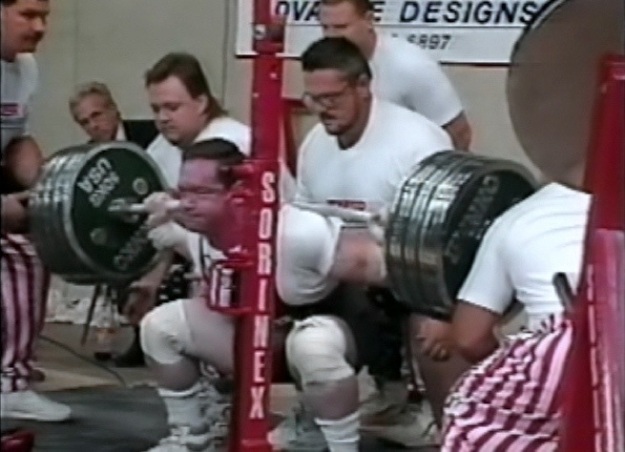 First off let me say that I love Donnie Thompson, Dave Hoff, and Louie Simmons, and I believe them all to be the heart of powerlifting. With that being said Dave’s 1210 squat was high. We all know that it was, but that dude killed his 975lb bench and 820lb deadlift. He is the strongest dude in powerlifting! No Doubt! It’s not Dave’s fault that the judge gave him the lift, but everyone in powerlifting needs to squatting lower. I’ve heard a lot of people talk about the equipment being too tight. Well then get a suit that fits or learn to squat in a suit. My friend Brent Mikesell squatted 1100 in a canvas suit and deep. Only the powers that be can stop this! Guys start doing things right, and stop worrying about a world record every time. If you set a record, let it be flawless. That is the only way to get the credibility back in powerlifting.

Guys let’s take the equipment off, or at least limit this mess. I know that I’ve competed in equipment, but I love raw so much more. Then it’s not up to who can buy the best equipment, but it’s up to the strongest man. If we ever want to take our sport to the world, raw is the only way. Guys like Dan Green and Chad Wesley Smith are showing the world that the USA guys can lift a ton of weight raw. Let’s get behind them and bring our sport to world. Dave Hoff would no doubt rock the raw world as well, so let’s see. Let’s put all of our studs together, and really see who the best is. I believe that we all started the same in the sport of powerlifting. I know that I wanted to be the strongest man in the world. I wanted to be the strongest raw, single ply, or however I had to lift to be the strongest. This equipment things has been a slippery slope, and I say let’s just be strong again. Forget about being master’s of the suit! What is that anyway? How did it get started? Let’s just be strong!